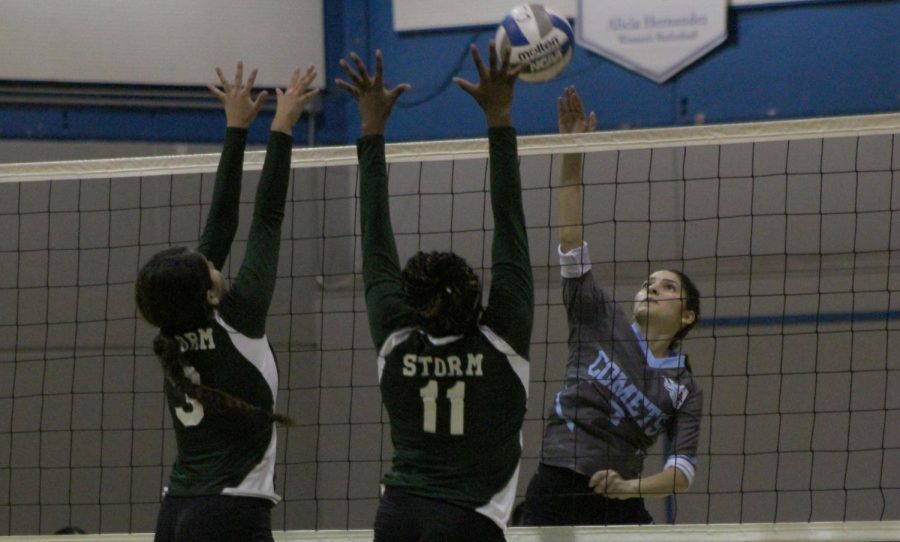 In its first rematch of the season, the volleyball team used a relentless offensive attack to crush Napa Valley College (0-12 overall, 0-8 in the Bay Valley Conference) in straight sets to sweep the season series Friday in the Gymnasium.
During their first meeting on Sept. 12 in Napa, the two squads had a near even clash with the Comets (2-12 overall, 2-6 in the BVC) narrowly winning 3-2.
With this game being the first rematch of the season, the Comets came into the game motivated to prove their superiority.
“We knew they were going to want redemption, so if we wanted to keep our place in the standings we had to win,” middle blocker Makaya Thomas said.
In the final practice leading up to the game, coach Christy Tianero had the team study film of the first game and planned to exploit the weaknesses they saw in the Storm during the initial match.
“They (Napa Valley) are freshman and they have a new coach so they won’t change much from last game,” Tianero said she told her team. “We noticed they have a certain rotation where their offense is bad, so we attacked that.”
Contra Costa College setter Kimberly Calip said leading up to Friday’s game the team knew the Storm’s setter was a strong hitter from the first game, and it adjusted defensively.
Set one was closely contested with both teams exchanging scoring runs. But ultimately the Comets capitalized on the Storm’s errors and took the set 25-23.
Riding the momentum gained in the first set, the Comets continued their scoring surge, seemingly shocking the Storm.
In the few moments the Storm managed to stabilize their descent, the team’s momentum faded by way of a stifling Comet block or falling apart during crucial volleys.
Powered by a consistent, well-rounded approach, the Comets stomped Napa Valley in set two, 25-11, leaving the Storm searching for answers that never came in the final set.
Throughout the game, Comet libero Delaine Baca anchored the defense with 12 digs and only one error while keeping plays alive and opening up scoring opportunities for CCC.
Baca said they started pushing the ball toward Napa Valley’s setter to force the team into situations where they had to scramble to get a clean hit off.
Thomas’ dominance up front contributed to the Comet victory. She finished with three blocks and kept the pressure on offensively with 13 kills on 27 attempts.
“I was excited for the game. Yeah, I was just really excited,” she said.
Napa Valley put up a better fight in set three. But its consistent failure to turn the few Comet errors into scoring runs ended any chance of its offense heating up.
A key block toward the end of set three by Thomas solidified the 25-21 set three Comet victory.
Tianero said, “Everyone played well. (Thomas) matched her season high in blocks, (Calip) stepped up on her serves and Victoria (Matue) had a lot of good serves and hit her spots.”
Now, just past the midway mark of the season, the Comets are looking forward to more conference rematches.
CCC will face Mendocino College Friday in the Gymnasium at 6 p.m. During their first meeting on Sept. 19 the Comets fell in five sets, 3-2.
“When we played Mendocino the game was close. Hopefully, when we prepare the way we did for this Napa game we can learn and beat Mendocino,” Tianero said.
The Comet coach said she’s confident her team can make the adjustments to do better in the upcoming BVC second round games.