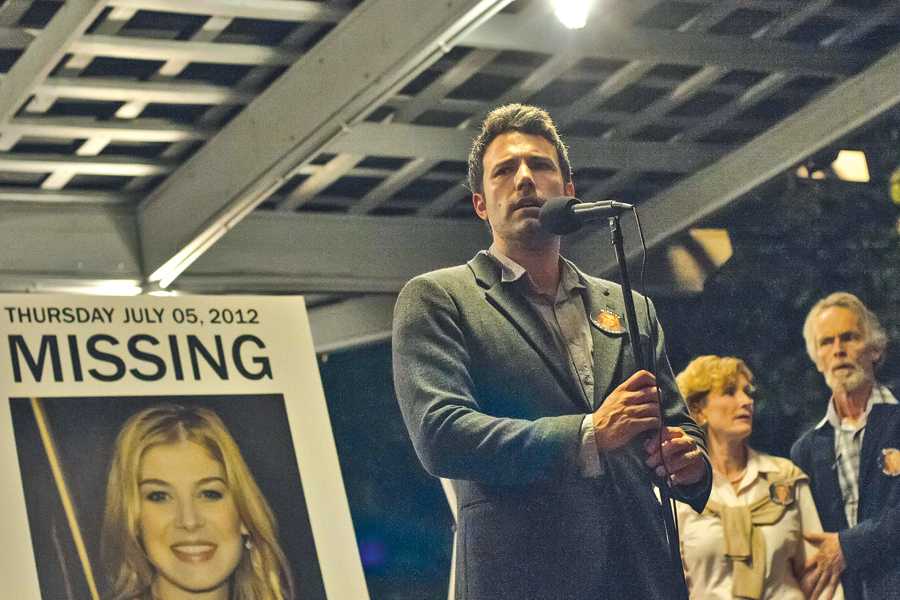 Marriage is hard work. It’s even harder with crazy counterparts.

That is one of the harsh realities David Fincher’s adaptation of “Gone Girl” throws into our faces and does not turn away.

Author Gillian Flynn wrote the screenplay from her 2012 best-seller which starts Ben Affleck and Rosamund Pike as Nick and Amy Dunne. Their relationship initially borders on aspiring but ends up disastrous, exposing a one of a kind matrimonial hell which Fincher and the rest of the cast and crew nail perfectly.

Affleck and Pike are in top acting form in their roles as imperfect partners, and awards buzz has been generated ever since the film was screened, with audiences agreeing by scoring high markings on reviewer sites like Rotten Tomatoes, and by taking it to first place at the box office.

Pike, in her first leading role, carries the non-linear structured storyline beautifully through stages of Amy’s life before and during her marriage with Nick up to her disappearance, showing a unique progression of a strong-willed woman. This is one of the dynamics readers found interesting about Flynn’s novel, a narrative about a strong and resourceful female protagonist.

Maybe it was this popularity that motivated Fincher to direct the film — no easy task in itself due to its whodunit, non-linear plot, making the mystery thriller hard to follow at times.

But if anyone is up to the challenge, it is a master storyteller like Fincher, whose feature film career includes six literary adaptations out of 10 films, including the immensely popular “Fight Club.”
He does not deserve full credit, however. Much of the film’s cautious and eerie atmosphere surrounding the main characters shows the great technicality shown by the crew and its ability to cooperate with a director known for his perfectionist style of filmmaking.

Everything from the music, composed by Trent Reznor and Atticus Ross of Nine Inch Nails fame (marking a third collaboration with Fincher after “The Social Network” and “The Girl with the Dragon Tattoo”) to the cinematography and editing, do a fantastic job of highlighting the film’s tones of suspense and ambiguity.

The level of dark humor and intriguing drama brought out by the cast rounds out the phenomenal acting, including Nick’s twin sister Margo (Carrie Coon) co-owner of the bar she and Nick operate at the time of Amy’s disappearance, and Detective Rhonda Boney (Kim Dickens) who is investigating the mystery with her partner Officer Gilpin (Patrick Fugit).

Neil Patrick Harris and Tyler Perry are wonderfully cast against their usual roles with Harris as Desi Collings, an ex-boyfriend of Amy’s, and Perry as Tanner Bolt, Nick’s eventual defense lawyer.
Captivating screen presence properly belongs to Affleck and Pike, who startle viewers with how far they’re willing to take these characters.

Pike provides voice-over narration as Amy writing in her diary, detailing the once happy, hopeful marriage that descends into a tale of dishonesty and deceit, begging the question: Did Nick Dunne kill his wife?

Their relationship is surgically laid out on the table for viewers as they recount when they first met at a party in New York and their time spent living in the city working as writers, to their eventual relocation to Nick’s hometown of North Carthage, Mo. through a series of flashbacks.

The film opens on the morning of Nick and Amy’s fifth wedding anniversary, and we see Nick routinely go about his day before returning home to find his wife missing and questionable circumstances surrounding the scene.

The sensationalist media hell storm and rescue efforts that follow cast a light on how far people are willing to go to keep appearances and the lengths of manipulation required to do so.