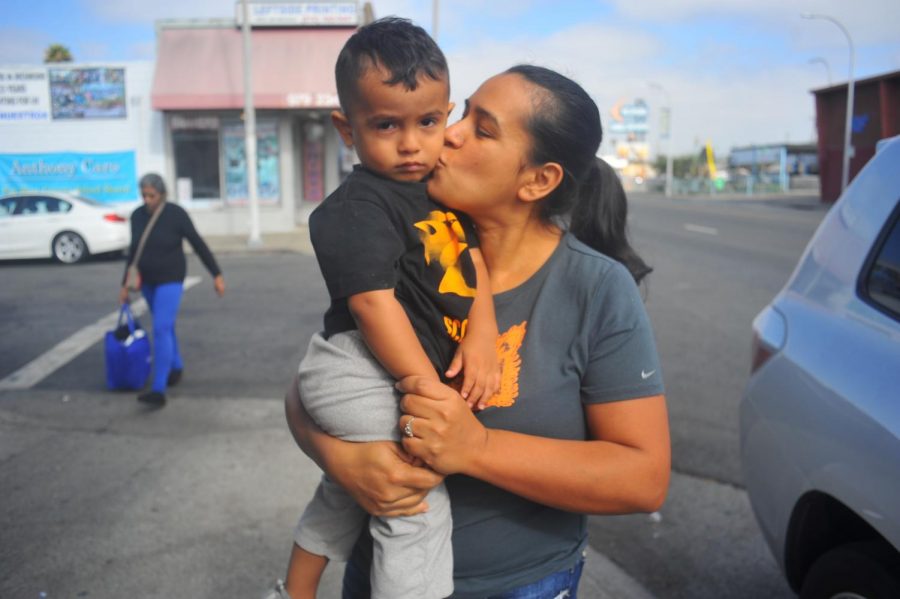 Guadalupe Mendoza kisses her son, Joshua Mendoza as she walks down 23rd Street in Richmond, California on Monday.

Contra Costa College’s undocumented immigrant community is prideful about its heritage, its history and its people.
The Advocate recognizes the efforts of the multitudes of groups who work to effect change on campus and outside of it.
Many in the campus community participated in a week-long event to celebrate the accomplishments and effort of so many who work for, and with, the undocumented community.
DACAWeek, recognized this past Monday through Thursday, offered different campus groups the opportunity to hold events that raised awareness about the struggles of undocumented immigrants in different environments.
Each day a different theme was reflected in the type of event held on campus.
Monday’s Get Social event aimed to use social media to raise awareness about undocumented people’s rights.
It used local friend groups to stir up activity on the platforms of influential public figures including local legislators’ social media accounts.
All the events were different and although they varied in theme, the purpose of each gathering was always to reverberate the humanity of the immigrant as worthy of being here.
Events such as Thursday’s Multicultural Night are critical toward a growing community.
As celebrations continue to unite through themes of inclusivity, so does the number of people who gain empathetic understanding about the immigrant community.
These events highlighted the diversity of the immigrant community at CCC.
Simply put, that is what CCC, and the campus community, represents.
The acceptance of all for who they are and therefore creating a space for undocumented people to have a voice, embodies the label of Contra Costa College as a sanctuary campus.
Unfortunately, modern day immigration policies in the U.S. do not reflect the belief of CCC’s administration, the Contra Costa Community College District or the people who work at it or attend it.
Despite finding ways of using immigration for financial gain and continuing the exploitation of migrant communities, the United States continually fails to enact justice when it comes to immigration.
There has never been a compromise from the government to legalize DACA recipients’ status in the future. Instead, they are just used as piggy banks or as the basis for political talking points.
Today, there is a standstill between Democrats and Republicans on what to do with Dreamers, DACA recipients and immigrants in general.
The consequence of this administration’s nationalistic view of immigration has contributed to creating a class of people who are needed for financial stability.
In reality, immigration policies are not always logical, but minimally they should be humane.