A passion for the homeless, hungry

Student, friends feed 75 to 100 people each week to make a difference in the East Bay through generosity 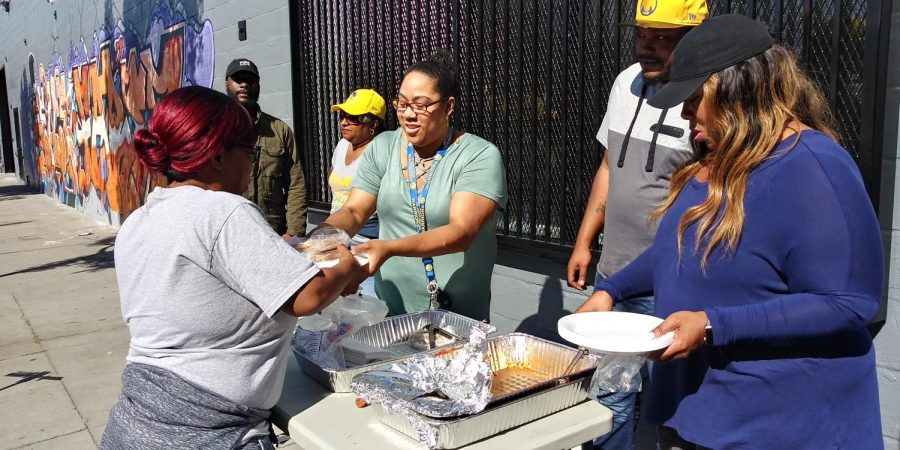 Contra Costa College sociology major Jessica Breaux (right) hands out donated food to those in need at the corner of 23rd and West Grand Street in Oakland, California, on Saturday.

The Bay Area has a multitude of inhumane problems facing it amid unprecedented growth. However, this growth isn’t spreading resources to everyone.
Even as local governments try to find solutions, homelessness has been a constant problem for many people struggling to make ends meet in California.
There are people in need of help now.
Instead of waiting for institutions to take charge and make a difference, 31-year-old Contra Costa College sociology major Jessica Breaux decided to make an impact on her own.
“Meals are not always provided or guaranteed for the homeless and hungry,” Breaux said. “If I can make a difference one plate at a time, then I’m committed to making a difference and change.”
Breaux feeds anywhere from 75 to 100 people, in the areas where people need help the most, at least once a week — and has been doing so for the past two years.
Using donated products from a local grocer, she prepares large batches of food to be distributed. After spending her mornings cooking, her first destination can be anywhere from South Richmond to West Oakland or the Tenderloin in San Francisco.
Most of the time she goes out alone, sets up a table and graciously gives out meals until everything has been given away.
She fills her schedule with ways to give back to the community.
Instead of living for, and focusing on, only herself, this busy student saw an opportunity to help those in need. Breaux took it upon herself to spread compassion one evening by reaching out into her community. She went to Richmond Food Market on Cutting Boulevard and asked the store manager, who for this story only wants to be known as Sam, if there was any way to use their unsold produce.
“Of course when she came in I said ‘yes.’” Sam said. “People will always have times when they need help.”
When produce has a blemish it tends not to sell, so it can go to better use this way, he said. Now, with ingredients handy, Breaux just needed to find where to hand out her homemade meals.
Finding places to serve proved easy for her.
It’s been six years now that she has been serving communities in San Francisco’s Tenderloin District with the Shekinah Christian Fellowship in San Francisco. Even those in her congregation are constantly inspired by how she humbles herself in giving.
“She’s been a blessing,” Sister Viola Ryan said. “I could call her today saying I need soup and she’d be down here in a few hours helping me serve.”
Sister Ryan has watched Breaux for years and is inspired by her consistent effort.
“She will get up at 4 or 5 o’clock in the morning, cook meals, cross the bridge and start respectfully greeting people,” Ryan said.
That humble mindset has stayed with Breaux as she expanded her hospitality to the East Bay.
Not content with just helping her congregation, Breaux started to put together what she calls, “Blessing Bags.”
She would keep bags filled with snacks and hygiene products in her car and pass them out.
Once she saw how large the need was for more help, she began to volunteer serving meals in the East Bay with the Greater Richmond Interfaith Program.
Where does the drive to help so many people come from?
Simply put, she said she remains committed because there is a need for it.
Breaux said she was always aware, and worried about, the difficulties that people experiencing homelessness face.
Her mother, Tonya Breaux, said that she has always been service-oriented with a good set of morals.
“She has been like this since she was a child,”
Breaux set up a serving table at 23rd Avenue and West Grand Street in Oakland on Oct. 13 where friends and family unloaded trays of food, water and utensils before joining hands in prayer, then handing out meals.
Donte Richardson, a former co-worker of Breaux’s, said, “Coming out and serving, it actually means a lot.”
He said during his first time joining Breaux, he was joyful to learn how impactful the simple act of giving could feel.
Another friend said she was glad to have joined Breaux in serving and seeing the opportunity on Facebook was one of many similar posts she usually catches.
Breaux surrounds herself with people of an honest and compassionate nature and plans on continuing her positive influence.
“The work doesn’t take a toll on me, however, it can be difficult trying to manage cooking such large meals in my small kitchen,” Breaux said.
What affects her most is when she inevitably runs out of food and has to tell someone that there is nothing left.
It tugs at her heartstrings in just the wrong way, she said.
She has big ambitions on her service journey, planning to work in pediatric social work with hopes of starting a nonprofit one day as well. But her ultimate goal is continuing to feed people while working with pregnant homeless woman.
Breaux’s efforts are actively improving the quality of life for those in the communities she serves.
“Some of these people used to dumpster dive for their meals and now they know where to find me instead,” she said.
Communities all over the Bay Area have welcomed her efforts with open arms.
Police officers simply respect her presence.
Even during tense situations, Breaux said people waiting for a meal will form a line dividing the sidewalk. One side of the sidewalk can have warm meals and smiles, while the other side could be an arrest in progress.
Breaux said. “I’ll ask the officers to eat with us as well and they’re always happy to join us.”