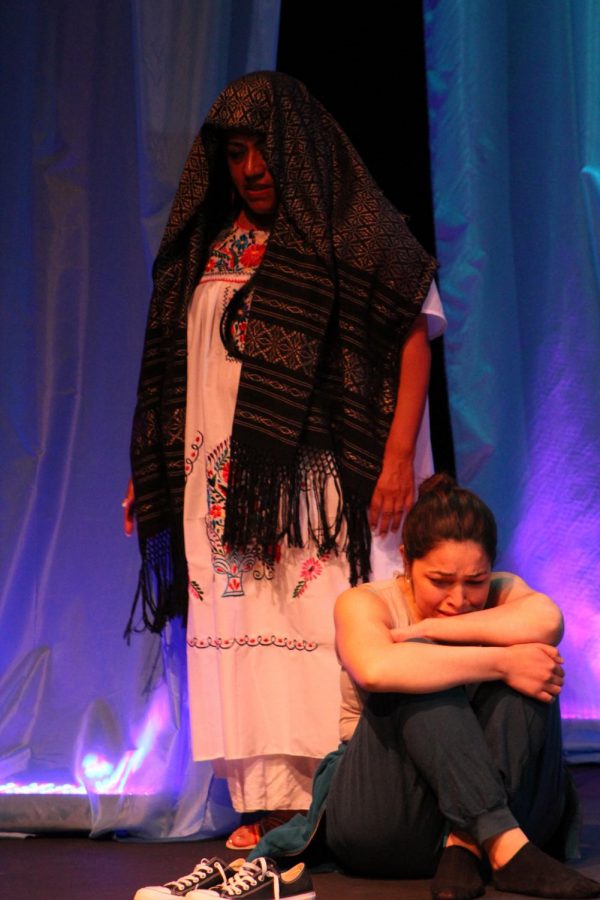 On the final day of the drama department’s production “Vengeance: A Ghost Story” in the Knox Center Sunday, Silvia Sobal got the opportunity to perform on stage with her son Oz Herrera-Sobal for the first time.
Herrera-Sobal was filling in for an absent cast member and the character he was playing, John Vargas, is the son of Sobal’s character Mara Vargas.
“I always saw her in the audience, but now we were on stage together. It warms my heart knowing she wants (to act). I especially love it because we got to perform together,” Herrera-Sobal said.
This unique situation wasn’t something that either of them thought would ever happen. While Oz is a lifelong actor, Silvia never planned on acting.
In college, at Instituto Tecnológico de Puebla, Sobal was a singer in a musical group that played Mexican folk music — but that’s as far as her stage experience or aspirations went. However, last spring Sobal auditioned for “The Cries of La Llorona” with her son’s encouragement and her familiarity with the La Llorona folktale.
“Having grown up in Mexico, hearing that story, I had to give it a try. When I was a little girl I thought I heard La Llorona around my house,” Sobal said.
After auditioning, she was selected for the part of the titular character La Llorona. Sobal said she was nervous throughout the rehearsal process as she had never experienced preparing for an acting role. The soliloquy-heavy nature of the role meant most of her time speaking on stage was alone.After weeks of rehearsal and waging a battle against her nerves, she took stage for the first time in April. Once the two-week run concluded, she was hooked. This led her to audition for this semester’s productions.
“I auditioned again because I like the adrenaline. I like people coming and enjoying what we are doing there on stage,” Sobal said.
Sobal’s path toward calling the United States her home was also an unintended circumstance. Born and raised in Mexico, an 18-year-old Sobal came to the United States to visit her sister in San Francisco in 1985.
After some convincing by her older sister, what originally was intended as a summer visit turned into a permanent stay.
“I didn’t want to stay. My sister was alone out here and didn’t have any siblings here. She was the oldest and I was the youngest, so I had to listen to her,” Sobal said.
The sudden move to the U.S. was difficult for Sobal. She had to learn English and adjust to her new surroundings, but the transition was eased by her strong support system.
“My sister had been here for a long time, so she was able to guide me. I enrolled in ESL classes, then counselors helped guide me along. It wasn’t that hard, thanks to the guidance,” Sobal said.
She earned an associate degree from City College of San Francisco and began working at San Francisco General Hospital to begin her nursing career.
Nursing was another situation where Sobal found herself doing something she didn’t plan to do.
Sobal said since she was a child she wanted to be a doctor, but when she came to the U.S. medical school was too expensive.
Her sister told her to go into nursing and work to pay her way through medical school. But once she started working as a registered nurse in 1991, her plans changed.
“I loved nursing, I really loved it. My interactions with the patients were closer than the doctors. The nurse is there, they cry with you and patients look for comfort with the nurse. I liked that connection a lot better, so I stayed in nursing,” Sobal said.
Both “La Llorona” and “Vengeance” were directed by drama department Chairperson Carlos-Manuel Chavarria who said Sobal is dedicated and learns fast for someone who’s so new to acting.
“One thing I like about her is she’s so new. She listens to what I say. She listens when I give her direction on the character and she takes that,” Chavarria said.
Chavarria is the only director Sobal has worked with, but she said each show has been a good experience.
“I love working with Carlos,” she said. “He’s fun and makes a lot of jokes when we are rehearsing. It’s easy going and I like that.”
Her castmates in “Vengeance,” Irena Miles, Joshua Saephan and Sheryl Meeuwsen all said Sobal is a pleasure to work with.
Each immediately made a emphasized how nice she is during rehearsals. “She’s very positive. Even if you’re having a bad day you can’t help but smile around her,” Miles said.
Sobal retired from nursing in June and acting has become one of the bullet points on her ever-growing schedule of activities.
“I just retired, so I have to look for other things to do. It’s fun not having to deal with work all the time — like having to do notes in the middle of the night and dealing with doctors. It’s recent, so I’m still getting used to it, but I do want to find more fun things to do,” Sobal said.
No matter what else she decides to pursue, it doesn’t seem like the desire to act will go away anytime soon. Chavarria said he wants Sobal to be in his spring semester show “The Hispanick Zone.”
“There are some roles she would be perfect for,” he said.