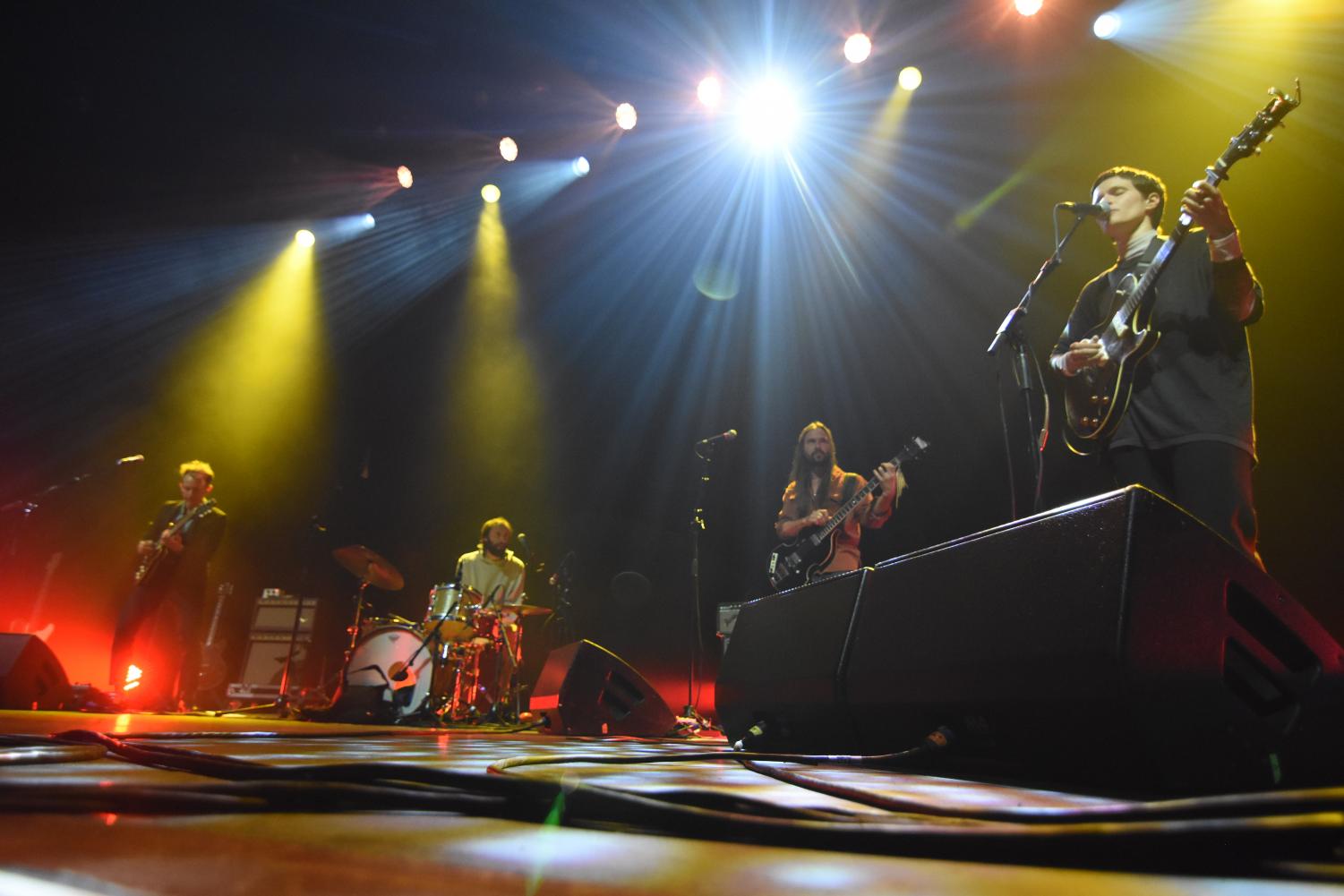 Big Thief vocalist Adrianne Lenker (right) sings during the group’s concert at the Fox Theater in Oakland on Oct. 29

OAKLAND ⁠— Poignant lyricism and heart pounding rhythms swung crowds through a successful performance as an indie rock band played a packed house on Oct. 29 at the Fox Theater.

On their “Two Hands” tour, Brooklyn based band Big Thief made a glorious stop in Oakland. The band’s folk-influenced sound brings listeners into a slow downtempo lull and comfort in which lead singer Adrianne Lenker delivers strong emotional lyrics. Their songs revel in the intimacy they create with listeners, unafraid to tackle topics like the dualities we find in our lovers and the passing of time.

They’ve built a loyal audience by touring constantly for four years since their first album release “Masterpiece” in 2016.

Their first album and the ones that followed have been released to critical praise as they have grown into one of the eras defining indie-folk bands.

Their unique mellow eclectic sound comes as the result of Lenker on guitar and vocals, Buck Meek on guitar and backup vocals, Max Oleartchik on bass and James Krivchenia on drums.

Songs settled listeners into a soft repeating cadence with guitars strumming on top of each other backed by delicate but vibrant percussion.

The paring lays the groundwork for Lenker’s hefty vocals.

Big Thief describes their process as excavating and exploring into their music and inner lives, digging deeper together.

Doors opened and crowds flooded in to watch opening act Mount Eerie share his indie-folk sounds. Audiences were primed to take in all of Big Thief’s intimate music after listening to a familiar yet different tone with the opening act.

The start of their set was a heavy stern tone with a performance of “The Toy” a song from their newest album “Two Hands”. The song takes on the issue of gun violence repeating “The toy in my hand is real” to a slow beat with glistening guitar plucks. Ushering in an almost electric feeling, the audience swayed in silence as they prepared for the band’s signature emotional honesty.

The band delivered on sharing an intimate evening as songs from both new albums “U.F.O.F.” and “Two Hands” explore in depth different ideas.

Songs from U.F.O.F. explored themes of the ephemeral and cosmic ideas, while songs from Two Hands focused on the more dreary realities that humans face.

Halfway through the show, they shared a refreshing performance of “Forgotten eyes” from their newest album Two Hands.

The lyrics show Big Thief’s concern with writing songs that resonate with people regardless of what they believe in. Simply put, they’re tackling the same universal truths that humans experience in a world. A world where we all participate in the consumption and destruction of its well-being.

The set list was filled with a range easing from a mellow ranged ballad telling stories of previous lovers, personal demons to indie rock thrashers that explore the harsh dualities in our lives.

The energy in the theater grew exponentially once the audience heard the band began playing “Masterpiece”. Its lyrics tell a story of dealing with grief “Old friends, old mothers, dogs and brothers/ There’s only so much letting go you can ask someone to do/ So I keep you by my side, I will not give you to the tide/ I’ll even walk you in my stride, Marie”.

With the passing of time we will all eventually deal with the loss of a loved one, a sentiment Lenker fights against by choosing to stay intertwined with whom she lost even through something as simple as changing her walk.

During a pause in their set, Lenker shared some of her sentiments with the crowd. She gave a relaxed talk on the multitudes of thoughts that run through her brain sharing a glimpse into the songwriter’s mind.

Before finishing up their set she also gave thanks to the band and manager for being a great group to tour with, giving a shout out to her manager’s penchant for soups.

What became clear throughout the night was how the group has mastered their distinct combination of defiant folk music and rough fuzzy guitar riffs.

The band chose to close out the set with one of their more minimalist pieces called “Magic Dealer”.

Hushing the crowd for a final time, the gentle sounds carried audiences into a cosmic silence.

The song resonated with the crowd until the final note.

As most of their music highlights, their show was a masterclass in dealing with the realities of life.

Every moment is there but for a second and we can decide to live in it and appreciate the passage of time and its experiences or painfully fight against the course.