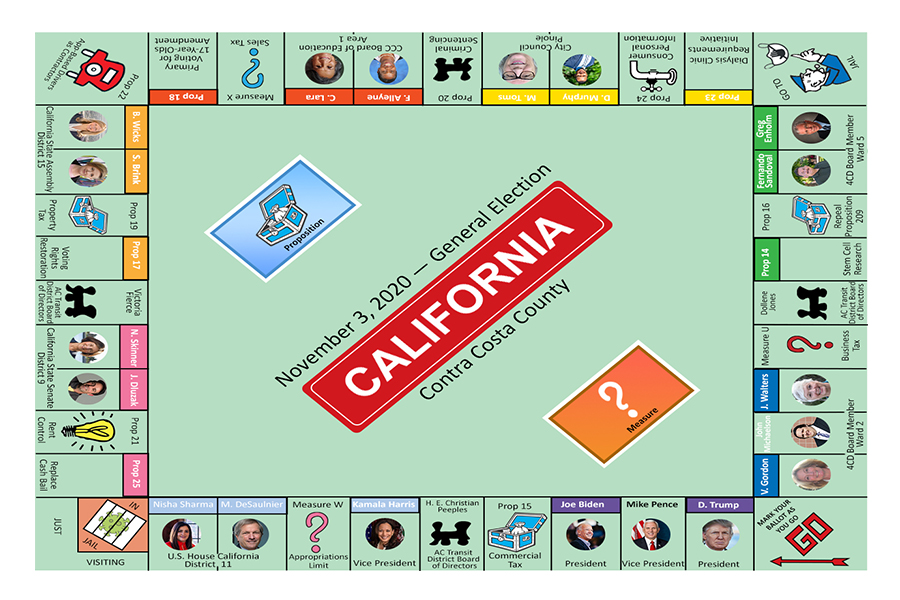 Created in 2004 through Proposition 71, CIRM was financed and approved to fund stem cell research. However, on July 1, 2019, CIRM halted future projects due to a lack of funds.

CIRM would be permitted to spend bond funds on operational costs and grants to other organizations. These organizations would focus on researching, testing, and creating programs around stem cell research. This includes research on therapies and treatments for diseases in the brain and nervous system.

Organizations such as The Community Care Centers of Excellence (CCCE) and Shared Labs Program (SLP) would also receive a percentage of the funds to advance similar projects related to stem cell research.

The initiative would also make changes to the Independent Citizen’s Oversight Committee (ICOC), which is responsible for overseeing CIRM.

If passed, a fourth group would be created to focus on improving access to treatment and cures.

Programs related to education and careers in stem cell research would also be established for undergraduate and graduate students.

California Proposition 15 would increase funds at public K-12 schools and colleges by amending the California State Constitution to require commercial and industrial properties to be taxed based on their market value.

The revenue from collected taxes will supplement decreases in revenue from the state’s income tax and corporation tax.

60 percent of the remainder will be distributed to local governments. The rest will be given to public K-12 and community college districts from the new Local School and Community College Property Tax Fund.

11 percent will go to community colleges and 89 percent will be distributed among public and charter schools as well as county education offices.

A state fiscal analysis found the ballot initiative would bring in between $8-12.5 billion annually.

Properties worth more than $3 million would be taxed based on the current market value, instead of their past initial purchase price.

This overturns parts of Proposition 13, a tax law passed in 1978.

Exclusions from the new proposition are residential properties, agricultural-zoned land, and any commercial or industrial properties that have a combined value of less than $3 million.

Supporters of Proposition 15 include the California Democratic Party, the Green Party of California, Oakland Unified School District, and the American and California Federation of Teachers.

“Every single student in California will benefit from this measure, but particular importance is paid to underserved communities — additional funding will go toward low-income students, English-learners, and foster youth. This, on top of the increased investments that local governments can make in their communities,” said Huerta.

Some of the official opposition for Proposition 15 are the Republican Party of California, California Fuels & Convenience Alliance, and the California Taxpayers Association.

The Los Angeles chapter of the NAACP published a statement in opposition: “There’s no guarantee that any of the new revenue will make it into the classroom. Even the California School Boards Association refuses to support it.”

A “yes” vote will support an amendment to the state’s constitution with everything listed above.

A “no” vote will reject changes to the state constitution and state tax rates. Commercial and industrial property tax rates would continue to be based on the property purchase price.

Proposition 16 will allow local and state government organizations to consider things like race, sex, color, ethnicity, and national origins during the hiring process, as long as it is not in conflict with state or federal law.

If approved, individuals applying for positions in public education, public employment and contract work would be reviewed for these qualities during hiring.

This would effectively repeal California Proposition 209, a proposition passed on Nov. 5, 1996. Prop. 209 prohibited the state from discriminating or permitting favored treatment based on the aforementioned characteristics, banning affirmative action.

Those in favor of Prop. 16 claim it would provide job opportunities and fair wages to all Californians.

Groups such as the League of Women Voters of California and the California Federation of Teachers (CFT) are in support of Prop. 16, arguing that it would help put an end to systemic racism and wage discrimination.

Other groups such as the Californians for Equal Rights (CFER) non-profit, are against Prop. 16, arguing that this would ensure certain levels of discrimination and provide a means of preferential treatment.

They believe that this would create inequality amongst Californians and that some would “play favorites” towards certain demographics.

If the proposition is passed, this would mean eventual changes to California government hiring processes. If denied, Prop. 209 would continue unless repealed in the future.

California Proposition 19 will be on the California ballot as a legislatively referred constitutional amendment on Nov. 3.

Presently, California homeowners can transfer tax assessments from one home to another of equal or lesser value without having to pay higher taxes.

Only those who are 55 years or older, have a severe disability, or victims of natural disasters and hazardous waste contamination are given eligibility.

However, with Prop 19, eligible homeowners can transfer their tax assessments anywhere within the state – even to a more expensive home – with an upward adjustment.

Additionally, those who are 55 years or older or have a severe disability can transfer their tax assessment up to three times.

For inherited properties, homes that will not be used as principal residences (i.e. second homes or rentals) can be reassessed at market value when transferred. This change could result in tens of millions of dollars in additional revenue.

The CRPF would be used to reimburse counties for losses related to the measure’s property tax changes. The CFRF will be dedicated to fire suppression staff and personnel.

The opposition to Prop 19 includes organizations such as ACLU of Southern California and Family Business Association of California.

This ballot initiative would reclassify specific theft and fraud crimes, such as firearm theft, vehicle theft, and unlawful use of credit card, as both misdemeanors and felonies, rather than just misdemeanors alone.

Additionally, serial crime and organized retail crime would be added to the state code.

Under this initiative, all people convicted of specific misdemeanors that were classified as wobblers (crimes chargeable as misdemeanors or felonies) or felonies before 2014 would have to submit DNA samples to state and federal databases.

The California Department of Corrections and Rehabilitation (CDCR) already has an existing parole review program. But this initiative would make it mandatory for the parole review board to consider add-on considerations before granting parole. The considerations include age, marketable skills, attitude regarding the crime and mental condition.

An additional 51 crimes and sentence enhancements would become defined as violent to exclude offenders from the parole review program.

The fiscal analysis for Prop 20 estimates an additional cost of tens of millions of dollars annually for state and local general corrections and enforcement.

By voting “yes” the voter would support the initiative to reconsider categorizations of wobblers, DNA collection for misdemeanors, and parole barriers.

A vote for “no” would leave the current statutes as is.

This year, the Republican Party of California held a campaign, ‘Keep California Safe’ (Yes on 20), in support of the initiative.

Former Governor Jerry Brown and the California Democratic Party supported ‘Californians Against the Prison Spending Scam (No on Prop. 20)’.

Prop. 21 would exempt units occupied for less than 15 years, and units owned by natural persons with no more than 2 units with different titles.

It also gives homeowners the right to get to increase their rental rate by 15 percent during the first three years– following a vacancy.

Those opposed are the Republican Party of California, the California Conference of Carpenters, and many other organizations.

This gives homeowners the right to get to increase their rental rate by 15 percent during the first three years– following a vacancy.

Those opposed are the Republican Party of California, the California Conference of Carpenters, and many other organizations.

California Proposition 23, the Dialysis Clinic Requirements Initiative, is a proposition that would establish certain requirements for chronic dialysis clinics.

The ballot measure would require chronic dialysis clinics to have at least one licensed physician present at the clinic — exceptions can be made when there is a genuine shortage of physicians.

Chronic dialysis clinics would be obligated to report data on dialysis-related infections to the state health department and National Healthcare Safety Network (NHSN). The principal officer must certify the report after review, and faces penalty if it is not accurate and complete.

If a clinic were to close, the principal officer must also provide a written notice and obtain consent from the state health department.

Additionally, chronic dialysis clinics would not be allowed to discriminate against patients in terms of offering and providing care. This includes refusing care to a patient on the basis of the person responsible for payment.

Voting “yes” on Proposition 23 would support this ballot measure that would set new requirements for chronic dialysis clinics. Requirements include having a physician on site while being treated, reporting data, obtaining consent from the state health care department, and being unable to refuse treatment to other patients based on who is responsible for paying.

Voting “no” on Proposition 23 would oppose the initiative to set the mentioned requirements for chronic dialysis clinics. According to a study by the Berkeley Research Group, Proposition 23 would raise healthcare costs by $320 million dollars. It would reduce access to treatment for people who may be at serious risk

California Proposition 25 is a bill that will replace the cash bail system in California with a risk assessment for people who are awaiting trial, upholding a contested California senate bill.

This new system would assess people on trial to see if they are a public safety and/or flight risk. The system would bring an increase to state and local costs that could reach up to the millions.

Cash bail was set to be rescinded in California when Senate Bill SB 10 passed in August 2018. However, opponents successfully lobbied to put the decision to voters with Prop 25.

The proposition is approved by the Democratic Party, the California Teachers Association and the SEIU California State Council.

Those in opposition are the Republican Party in California, the Orange County Board of Supervisors and the California Small Business Association.

Jeff Clayton, a spokesperson for Californians Against the Reckless Bail Scheme, states Prop 25 “is a reckless attempt at changing the state’s bail system and is fundamentally bad for California.”

Former Assemblyman Joe Coto also argues that “the biggest flaw in SB 10 is the use of computer programs to make important justice decisions”. He believes that upholding SB 10 will make it harder for people to have a successful trial.