Statement of inclusivity in question 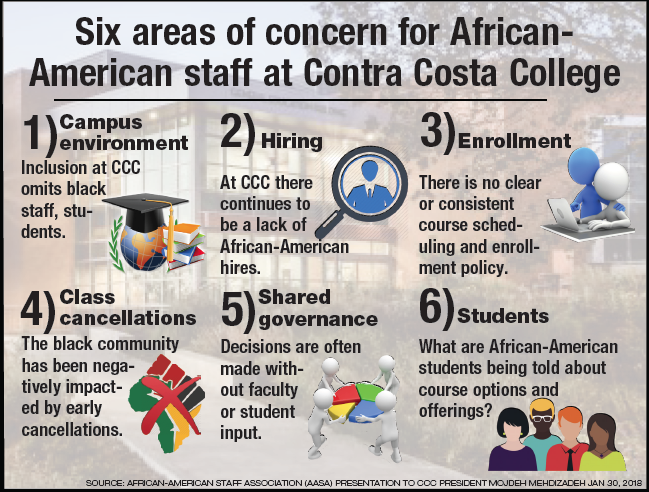 Concerns that the Contra Costa College community has become comfortable neglecting its students and staff of African descent by failing to support their programs, or hiring black faculty and staff, has reached a boiling point.

“Since last year, there is a growing and well-founded concern that ‘Black Lives Matter’ increasingly less so at CCC and this disturbing trend cannot continue,” history, anthropology and geography department Chairperson Manu Ampim said. “To address this new trend, there have been campuswide efforts over the past two months to highlight the unique experiences, contributions and concerns of people of African descent.”

Shortly after the presentation, a Contra Costa Community College press release on Feb. 8 announced Mehdizadeh’s reassignment to the District Office in Martinez.

Although concerns were raised to Mehdizadeh, who briefed Chancellor Fred Wood about the meeting, the trend of omitting students of African descent continued.

In an April 2 campuswide email sent by Director of Marketing and Media Design Brandy Howard on behalf of Interim President Chui L. Tsang and Dean of Institutional Effectiveness and Equity Mayra Padilla with the subject line “A note on our inclusive community,” a call to action was given urging the campus community to rally behind Muslim students, DREAMers, LGBTQ individuals and women “during these especially trying moments” over the past year.

Ampim said, “There’s no justification. If you’re making a list of students that have had challenges over the past year, with no mention of students of African descent, there is no way to justify it. There could not be a better example of the concerns we’ve raised.”

In an attempt to thwart this continuing trend, the AASA invited Chancellor Wood to CCC to hear the complaints first-hand on April 11.

Current faculty and staff, retired members of the AASA, the ASU president and a representative from the El Cerrito chapter of the NAACP attended the meeting.

“We need Wood to step up and bring leadership from the top down because if it comes from the bottom up, it might not be pretty,” CCC counselor Andrea Phillips said.

The AASA presented information stating there have been no African-American male counselors hired at CCC in the past 12 years. Furthermore, the association claims minimal hiring of science, technology, engineering and mathematics (STEM) instructors of African descent have been made, despite nationwide efforts to diversify the field.

According to the district information management system Datamart, the number of African-Americans who hold positions at the various instructional levels at CCC has fallen in the past 10 years.

Administrators have dropped from seven in 2008 to four in the fall of 2017. Tenured or tenure track African-American faculty have also fallen from 18 to 13 over the same time period.

Three of the four previous CCC presidents were African-American and the upper-administrative positions of dean of students and dean of instruction have also shifted away from African-American leadership.

During the presentation, attendees passed around the most recent 28-person new-hire list, including deans and upper-management, to show who filled the open positions.

Retired AASA staff member Michele Jackson said, “I think the AASA needs a listing as to how we advertise positions, who are we advertising to? We need that official listing so we can come up with some suggestions of how to include the more diverse organizations. When a job comes up, who do we advertise to, where does it go and who sees it?”

AASU President John Wade said some people on campus are part-timers who eventually want to become full time and have been passed over when applying for positions here.

Wade, who is the college athletic director, said, “I don’t have a problem with hiring other people. My only problem is when we don’t hire anyone that looks like us.”

The association also used examples to demonstrate how faculty and students of African descent have been adversely impacted by early class cancellations. The use of early fill rates to determine what classes should be canceled was also brought into question.

At CCC, African-American students make up the second largest student demographic at over 16 percent, or 1,161 students, according to the California community colleges Chancellor’s Office information management system, Datamart.

Hispanic students make up 44 percent of the student body, with white/non-Hispanic rounding out the three largest demographics at 11 percent.

Ampim said departments chaired by faculty of African descent have a higher standard to meet.

The association contends the flawed procedure led to a number of AFRAM class cancellations before the semester began, while other classes were allowed to continue.

“We’re fine with cutting classes if it’s equitable, but that has not been the case,” Ampim said. “This is a late enrollment college and our classes were cut nine days before school began. Students didn’t have a chance.”

Even while working to address an improper enrollment strategy, getting the college website to properly list the classes has also been an uphill battle.

“You almost have to be a diligent researcher to find the AFRAM classes,” Ampim said.

Prospective students looking for African- American studies classes must search under the special programs tab when enrolling. METAS and Puente classes can be cross-listed in different sections, but for African-American studies, administrators say software constraints limit the ability to promote those classes.

“When I was here I served on the scheduling committee and the website committee and things were added and eliminated all of the time,” Jackson said. “I know that the revisions can be made and we don’t need a whole lot of software. Maybe we just need to bring in the experts.”

The AASA also contends that decisions across the campus are made without faculty or student input.

“Shared governance is a wonderful idea, but it’s not here now,” Ampim said. In the past there was shared governance because even though management could make autonomous decisions, why would they make decisions that would alienate their faculty?

Now, he said, it doesn’t seem to matter very much.

According to CCC Vice President Ken Sherwood, the shared governance process by which decisions are made through committee rather than by the college president is enacted vastly different here than at other campuses.

“Every college in California has at least a public commitment to shared governance. It’s required by law,” Sherwood said. “I think people here misunderstand what shared governance means. Even the terminology is inaccurate.”

“It’s really different to have a president say ‘I’m not going to impose my will on this college,’” he said.

Chancellor Wood said to the AASA group on April 11, “Because we’re in the midst of a search for a president of this campus these issues are very important. To be able to hear them now while we’re in the process of looking at candidates and what would be a good match for this campus to be able to address these issues, would be critically important.”